JUUL Pulls Flavors from Shelves Ahead of Controversy 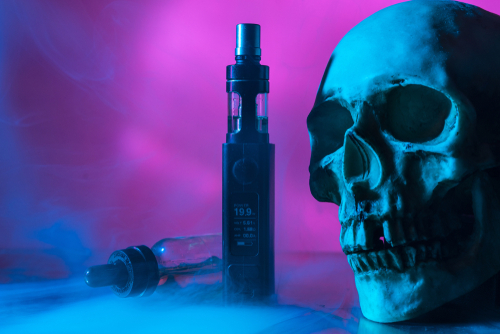 Flavored vapes are more enticing to teens and young adults, which means that they may not try cigarettes at first, but will become hooked on nicotine just the same. Andrea Villanti, an associate professor at the University of Vermont’s Center on Behavior and Health, said, “Something that tastes like candy is more palatable to a young person than tobacco flavor on its own,” according to an article on MedicineNet. The article also states that those who start out vaping at a young age are more likely to be vaping a year later, whereas those who try the tobacco-flavored vapes are not.

The Trump Administration, along with some states, have been trying to get the flavored vape oils banned because of the lung damage caused by vaping. According to the CDC, as of Oct. 29, 2019, 1,888 lung injuries were associated with vaping. As of the same date, 37 vaping-related deaths have been confirmed. Though the CDC and FDA have not come to a definite conclusion that any product or ingredient in vaping products caused the lung damage, the CDC recommends not using vape products that contain THC and advises people not to buy vape products off the street.

A USA Today article stated that JUUL Labs is suspending online sales of flavored e-cigarettes, but will be keeping the tobacco and menthol-flavored products on the market. The ban is for the United States. The company already banned mango, fruit, crème and cucumber flavors because watchdogs attributed lung damage to flavored vapes.

As of November 2019, the FDA is still reviewing vaping, and JUUL Labs stated that the products would remain banned during the FDA review. According to USA Today, JUUL Labs is considering a ban on other flavored e-cigarettes that could lead to nicotine addiction.

However, JUUL Labs did say that e-cigarettes still help adults quit smoking combustible cigarettes. As soon as K.C. Crosthwaite, the CEO of JUUL took office in late September 2019, he also suspended advertising for the vaping products.

The company acknowledges that lack of trust in the vaping industry and said it believes the FDA review of effects on the health of those who vape is the best way to determine what role vaping products help those who smoke combustible cigarettes to quit, while at the same time, keeping vaping products away from teens and young adults.

However, Robert Jackler, who is a vaping watchdog and a professor at Stanford University, said the ban of the flavored vaping products is “a step in the right direction,” but also noted that teens are now using the tobacco and menthol-flavored products. Jackler did say that JUUL should only offer vaping products in unsweetened tobacco flavor.

According to USA Today, a preliminary report released by the FDA said that 64 percent of high school students who used the sweetened e-cigarettes migrated to using the menthol and mint flavors. Matthew Myers, the president of the Campaign for Tobacco-Free Kids, accused JUUL of being deceptive in its claims of selling only menthol versions in the United States because the company “re-categorized the popular mint flavor as menthol.”

If you or a loved one are suffering from a lung injury due to vaping, contact Wallace & Graham for a consultation.

0 comments on "JUUL Pulls Flavors from Shelves Ahead of Controversy"

Whitney and Megan have been wonderful over the past 2 years. They both have taken time out of their busy schedules to answer any questions, comments or concerns. I would be glad to have them on my side again if I ever needed. In my opinion you can't go wrong with this team.

Special thanks to Whitney Wallace for assisting me with my workers compensation claim. Whitney and her paralegal, Megan, were patient and understanding. They stayed on top of any issues and assisted me through the entire process. Whitney reassured me that it was ok to seek the benefits that I was entitled to receive. The dedication and hard work of Whitney and Megan resulted in a settlement that I am very grateful to have received.

I would like to personally thank you for everything you have done for myself and my late husband over the years.  The hard work and dedication you have showed does not go unnoticed.  I am grateful for your consistent efforts to ensure that my husband and I got the justice that we deserved.

Dear Mrs. Wallace, Thank you for taking time out of your busy schedule to call me Saturday to discuss my husband's case. I was shocked to know that you were STILL working on my behalf. I am amazed and still amazed! In life, there are many paths you can take and many people who share the journey -- but it is the special people who help you along the way, and the most important people who care enough to give of themselves unconditionally. Thank you for being one of these special people. I also say this for Attorney Graham and staff.